Breakfast time is our house is one of our favorite meals. I love a variety of breakfast foods, but oatmeal is one of my favorites.

I love to make my Slow Cooker Apple Cinnamon Oatmeal because it is a simple and delicious recipe, and it can be made an eaten during the week on busy mornings.

My recipe is filled with old fashion oats, fresh apples, ground cinnamon, brown sugar, and maple. I love to keep the apple pieces nice and big for lots of yummy apple flavor.

Using apple cider for my cooking liquid and a little whole milk add great favor. I love the additional apple flavor and spices from the cider. It is also easy to use apple juice in place of the apple cider.

If you’ve tried my Slow Cooker Apple Cinnamon Oatmeal or any other recipe on Cheese Curd In Paradise please take a minute to rate the recipe and leave a comment letting me know how you liked it. I love hearing from you! You can FOLLOW ME on: 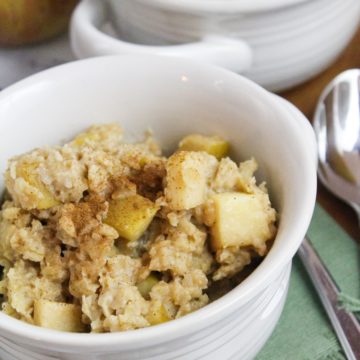