Did you know that I use to hate cheesecake? It's true. Hated it. When Ron and I started dating I founf out he loooovvveeeddd cheesecake and it was early in our relationship that I wanted to do things like bake for him....I don't do that anymore- now I make him play Trivial Pursuit with me so I can win.  I learn to like cheesecake I decided that I needed to learn to make it. The more I made it the more I liked it. My parents never made cheesecake and prior t learning to make it I assumed it was the out of the box stuff. Oh I was wrong...and no offense to you boxed no-bake people...actually that's a lie...the no bake stuff if gross or at least I think so, but I always hated cheesecake and probably shouldn't be trusted with those kind of opinions.
Since trying many cheesecake recipe you can find these lovelies on here:
Mini Chocolate Chip CheesecakesMini Churro Caramel CheesecakeCarrot Cake CheesecakeChocolate Peanut Butter CheesecakeChocolate Glazed Baileys Irish Cream CheesecakeRed Velvet CheesecakeCannoli CheesecakeGuinness Chocolate CheesecakeMini Chocolate Caramel CheesecakeTriple Chocolate Cheesecake
I think my favorite is the Triple Chocolate. It as the first one I really "mastered". I also  lllooovvveeeee the Chocolate Peanut Butter one as well.  I have made a few that I never photographed and need to re-make as well. I made a Mile High New York Style and a fresh strawberry, but they were eaten too quickly.
I have been on a kick with mini cheesecakes lately. The main reason I really like making them is because much of my baking is after kids are in bed and the minis bake/cook faster so I can get them in the fridge to chill before midnight....we have all had that cheesecake that just won't get done.... They aso don't need a water bath to bake....double awesome....but I normally do everything in my power to avoid water baths because I hate them for some reason. I have a lot of strong feeling surrounding cheesecake apparently.....
I want to make plain mini cheesecakes for Easter this year and found this recipe. I made my own sauce from Door County cherries and made a few adjustments, and the end result was delicious! I think this is one of the easier cheesecake recipes I have made and they turned out perfectly.  The one downside of minis is they are less forgiving than a large cheesecake. It is very easy to over bake them. I think that is why I made a lot of large ones first to get a good feel for when they are truly done. If you make this recipe keep a close eye from about 17 minutes on to make sure the center is slightly jiggly. If you over bake they crack and if you under bake they sink. No good. There is not a hard and fast rule and mainly you just need to keep a close eye.
Like I said, I used cherry, but the original recipe provides a recipe for a strawberry or salted caramel topping and they both sound delicious.
Tonight we are relaxing around the house. I really need to ut mulch down in my front yard so it doesn't look like a jungle like last year....I give myself a break because I had just birthed another human... This year will be the year the yard looks better! We will see if that actually happens....
Enjoy the cheesecake an have a great week my friends! 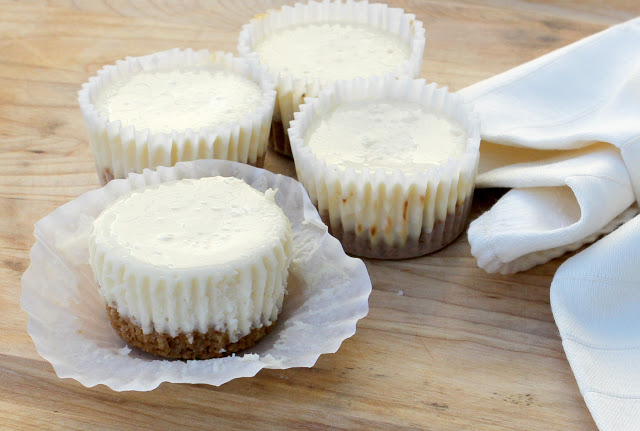 Place graham crackers in a food processor and crush. Pour in melted butter and as the food processor crushed the crackers. If you do not have a food processor a sealable bag and a rolling pin or heavy can will do the trick.  Divide graham cracker mixture among 24 paper lined muffin cups (about 1 ½ Tbl per liner) . Press mixture into an even layer. Bake in preheated oven 5 minutes. Remove from oven and allow to cool while preparing filling.

In the mixing bowl, whisk together 1 ½ cups granulated sugar with 3 Tbsp flour until well blended. Add softened cream cheese to a to the mixing bowl of a stand mixer (you can do this by hand too and pour sugar mixture over top. Mix mixture on low speed until smooth. Mix in eggs one at a time and blend on low speed, while scrapping sides and bottom of bowl and mixing just until combined after each addition. Add vanilla and sour cream and mix just until combined. Tap mixing bowl against counter top about 30 times to release some of the air bubbles. Divide mixture among muffin cups filling each cup nearly full. Bake in preheated oven 18 - 23 minutes (mine were done in 19 minutes), centers should still jiggle slightly, don't overbake (if they begin to crack they are starting to become overbaked). Remove from oven and allow to cool 1 hour. Cover loosely with plastic wrap and place in the refrigerator; chill 2 hours. Store in an airtight container in refrigerator or freeze.
Previous Post: « Buffalo Chicken Roll-Ups
Next Post: Ginger Lime Summer Hummer »